Always Under Construction with new data and properties added often. See below for more details on some of the properties available.

Note: Red highlighted below indicates work completed by or under the supervision of Ken Galambos P. Eng. (Click on an image to enlarge and on a document to download.) 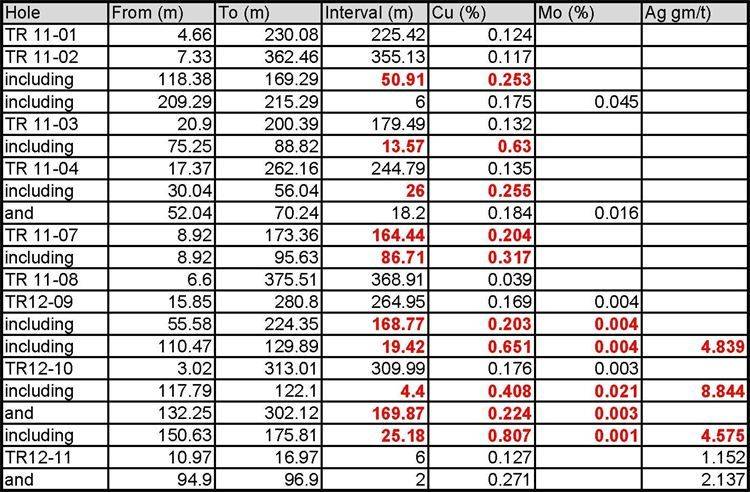 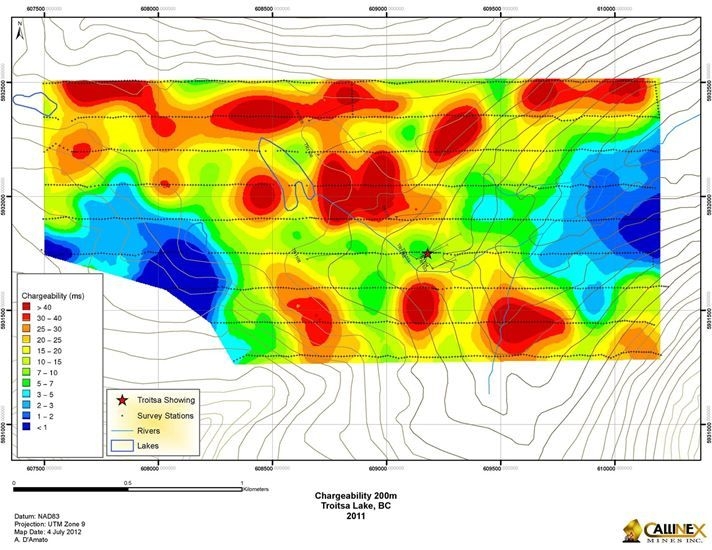 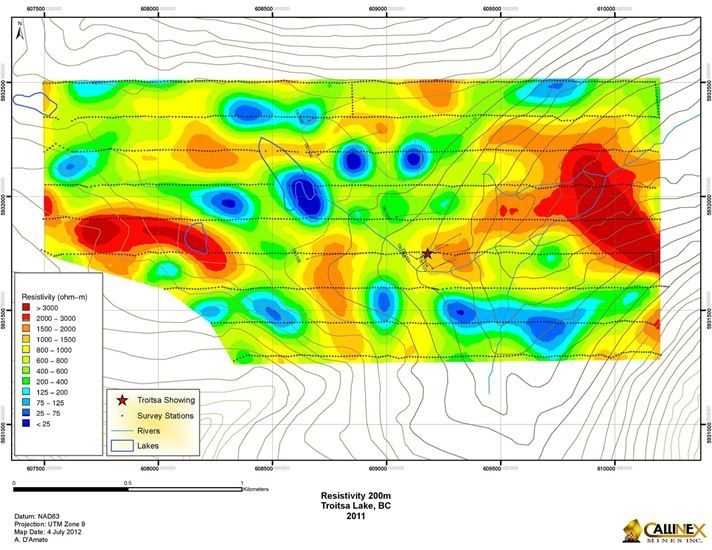 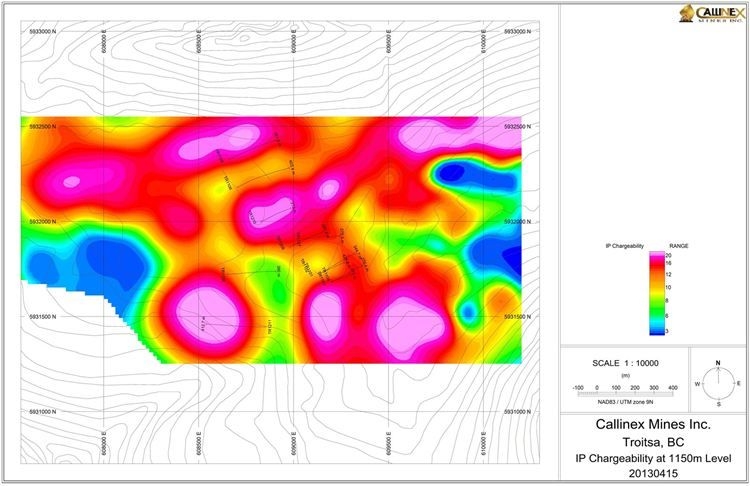 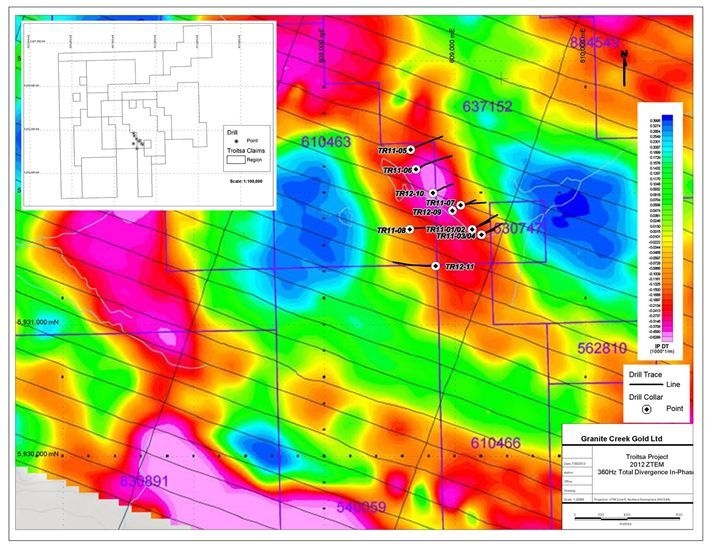 Drilling to date has successfully tested only the historical "Main Zone" trend and only one of more than a dozen, large, coincident IP Chargeability/Resistivity anomalies identified from ground surveys. Historical and newly discovered areas showing precious metals enrichment have yet to see any systematic exploration.

Sampling, Drilling and Airborne Geophysical Report on the Troitsa Project - 2013

The Vanstone Creek drainage has been explored by a number of companies since 1969. Initial prospecting discovered crudely banded massive sulphide boulders in a small tributary that assayed up to 11.44% Cu, 43.6g/t Au, 85.8g/t Ag and 0.14% Zn. Subsequent programs located similar boulders from 10-60cm thick and assaying up to 3.8% Cu, 2.5g/t Au, 61.7g/t Ag, 1387ppm Co and 136ppb Pd in surrounding creeks. Numerous minfile showings in the area report pyrite, pyrrhotite, magnetite, chalcopyrite and sphalerite as disseminated, in lenses, veins, narrow veins, fine cross-cutting fractures, and in zones of strongly fractured and altered volcanic rocks with strike lengths over 350m. Values from bedrock sampling range up to 47% Fe, 0.9% Cu, 0.2% Zn, 0.02% Pb, 3.4g/t Au and 3.4g/t Ag. A number of soil geochemical surveys have identified numerous large multi-element anomalies in the drainage.

Two airborne surveys have been flown over the property. In 1980, a magnetic lineament with a strike length in excess of 1km in part underlying a geochemical anomaly was identified east of Vanstone Creek.

On the east side of Vanstone Creek, very angular float boulders in glacial till were discovered approximately 600m down-ice from an airborne magnetic high anomaly thought to be the source for the anomalous RGS samples collected on Vanstone and Harriet Creeks. The boulders assayed up to 3.165% Cu, 1.58ppm Au, 93ppm Ag, 0.15% Zn and 0.029% Co.

Sampling of bedrock near the centre of the magnetic anomaly returned 1.395ppm Au from andesite with pyrite veining.

The property covers a highly mineralized, porphyry system. The claims cover two showings of note. Historic chip sampling at the Natlan showing returned values to 700ppm Cu and 1650ppm Mo over unspecified widths. At the Ace showing, historic B/C-horizon geochemical surveys returned >500ppm Cu over an area >1800m long and up to 800m wide. Noranda Exploration staked the Ace area repeatedly between 1971 and 1987, but no records of any work completed have been located in the public domain. In 1997, Teck Resources confirmed a part of the soil anomaly and identified a significant Cu/Ag porphyry system in sericite altered granodiorite. Chip sampling returned 910ppb Au, 36ppm Ag and 1169ppm Cu over 5m at the ridge top and 578ppm Ag, 1219ppm Cu and 4138ppm Pb over 10m, 400m NE and at elevation. In 2008, Paget Resources returned results of up to 0.6% Cu, 0.245% Mo, 3.27gm/t Au and 200gm/t Ag from select samples of mineralized intrusive and sedimentary rocks at the Ace.

Aster satellite imagery shows extensive areas of ferrous oxide alteration over the higher elevation on the claim group. Intense silica alteration is noted over a strike length of approximately 4500m, 1km north of the Ace showing.

Approximately 2000m on strike and downhill to the southwest on the till covered slopes, humus-Ah sampling identified an area 1150m wide that is highly anomalous in base and precious metals. A 900m section of this anomaly averages 80ppb Au with values up to 397ppb. Response Ratios for this anomaly average 287 x background and up to 3970 x background for gold. Additional sampling in 2013 extended the multi-element anomaly present at the northern end of the line by an additional 300m with Response Ratios for gold between 6 and 13 x background. This anomaly remains open to the north.

2013 bedrock sampling in the lower Ace area returned values of 12.5% Pb, 6.6% Zn and 168ppm Ag from massive float samples and up to 1.037ppm Au, 275.6ppm Ag, 2.36% Pb and 3.96 Zn/1m from veining (similar in style to the Silver Standard mine) below the highly anomalous silver-in-soils anomaly. Six of ten bedrock intrusive samples collected in this area returned values over 100ppm and up to 502ppm Mo while all ten samples returned anomalous values between 120ppm and 1481ppm Cu.

Extensive sampling in 2013 identified numerous other areas on the property to have anomalous Ah horizon soils with gold values to 31 x background over widths between 100-400m.

Infill Ah sampling in 2016 identified three zones over a 1400m area, west of the large Ah gold anomaly discovered in 2012. The northern anomaly is 300m wide with Response Ratios for gold up to 335 x background. The zone is also anomalous in silver, arsenic, bismuth, iron, antimony tungsten. A float sample of massive sulphide collected in the middle of this zone assayed 17,952.5g/t Ag, 2.52g/t Au, 1.63% Cu, 15.8% Zn and >20% Pb. A second zone to the south on this line measures 400m wide with gold RRs up to 540 x background with minor bismuth and antimony.

Ah Response Ratios for gold over a 900m wide zone

The Nat claims cover a km-scale porphyry target located roughly 11km NNE of the former Granisle mine. The area is mostly till covered and targets were initially identified through basal till sampling by Vic Levson as published in Bulletin 110. Well developed till dispersal plumes were identified with highly anomalous values in Zn, Pb, Cd, Hg, Fe; and moderately anomalous in As, Sb, Ag Mo. Previous exploration by Noranda located mineralized BFP float in an area measuring 1500m x 11km with values up to 6.1% Cu and 0.43ppm Au. A high-resolution airborne mag survey flown by Astorius Resources identified a mag high linear coring the NNE trending mag low anomaly identified in government surveys.

Humus-Ah transects were completed across three targets in 2012. Response Ratios were calculated as per Heberlein's methodologies in GSB 2010-03 publication, "An Assessment of Soil Geochemical Methods for Detecting Copper-Gold Porphyry Mineralization through Quaternary Glaciofluvial Sediments at the Kwanika Central Zone, Noth-Central British Columbia".

The Nat North transect returned 500m of anomalous humus with Response Ratios to background of up to 5.6 for gold, 3.5 for silver, 3.4 for copper and 6.7 for molybdenum, while indicator elements returned values of 4.7 for iron, 16.8 for arsenic, 4 for antimony, 12 for bismuth and 23 x background for lanthanum, a REE often associated with porphyry deposits.

Prospecting down-ice of the Nat North target located a number of cobble to small boulder sized mineralized float samples that assayed as high as 3390ppm Cu and 0.244ppm Au. 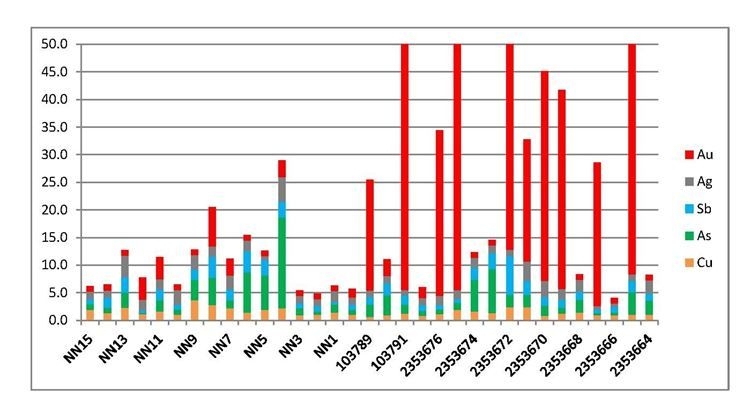 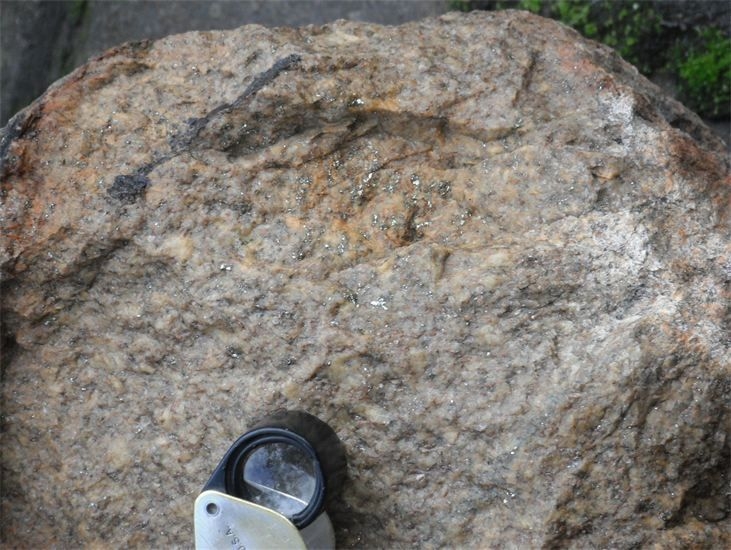 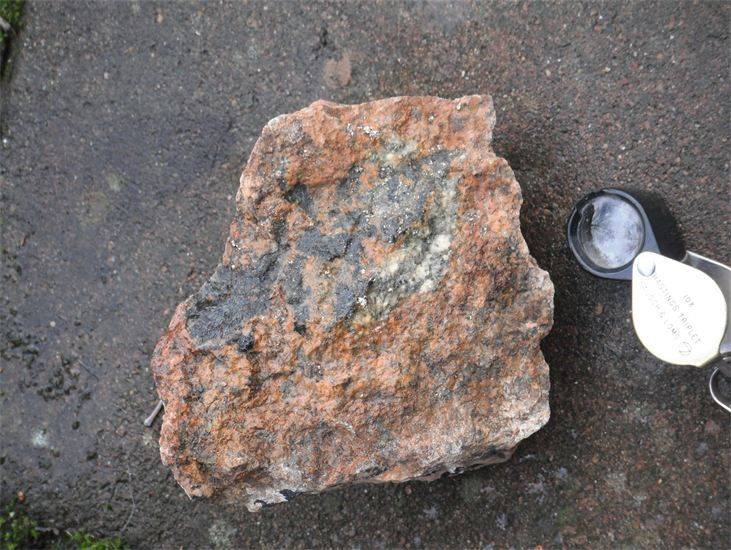 The Meteor target was identified by government airborne geophysical surveys and followed up in part by ground IP completed in 2007. Government 1st derivative magnetic surveys identified an intense magnetic low surrounded by a magnetic high halo. This is the same signature as many of the Tombstone Suite intrusives located in Alaska and Yukon. This intrusive suite is associated with significant gold deposits such as Fort Knox in Alaska (5+ million oz Au) and Dublin Gulch (2.7 million oz Au) and many more in Yukon.

Prospecting in 2010, identified epithermal style mineralization in silicified, clay altered felsic volcanics down ice from the main magnetic anomaly which is covered by glacial till. These float samples measuring from cobble to boulder (0.5m) returned results anomalous in many of the epithermal indicators such as Hg, Sb, as well as Cu to 521ppm, Mo to 124.1ppm, As to 279.7ppm, Ag to 7.657gm/t and Au to 60ppb. Limited MMI soils collected over the property returned anomalous results both over the IP and larger magnetic targets. 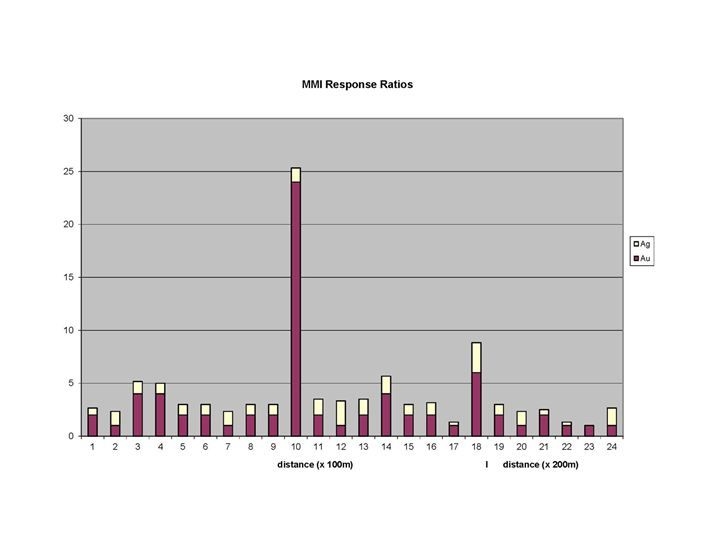 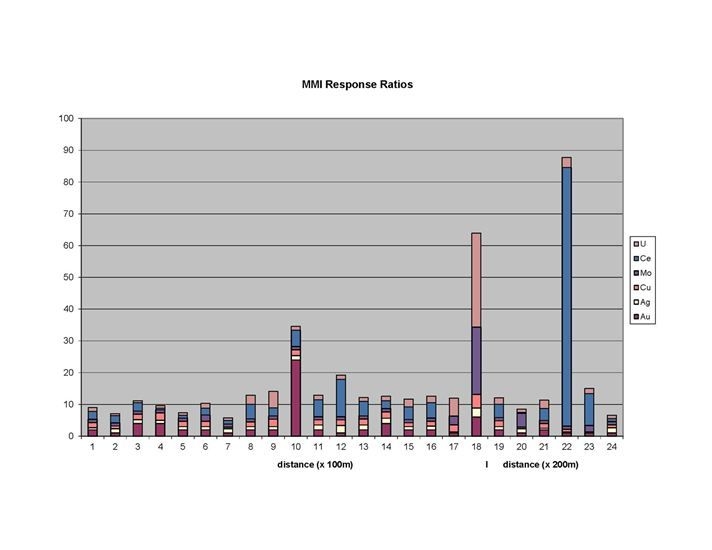 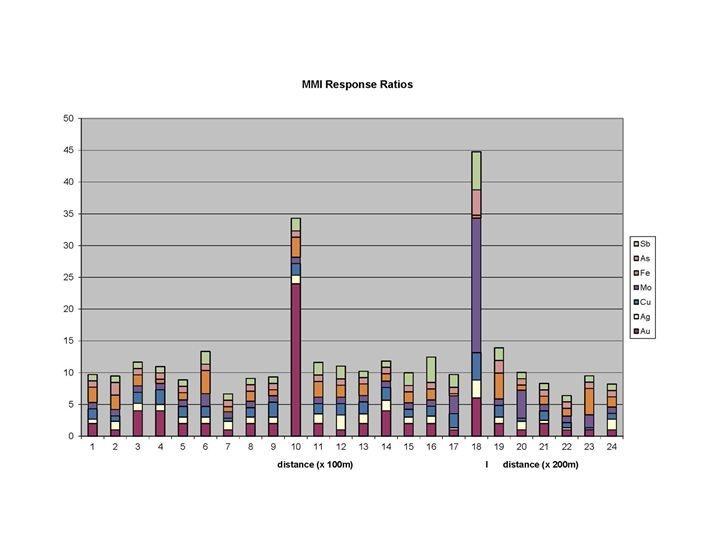 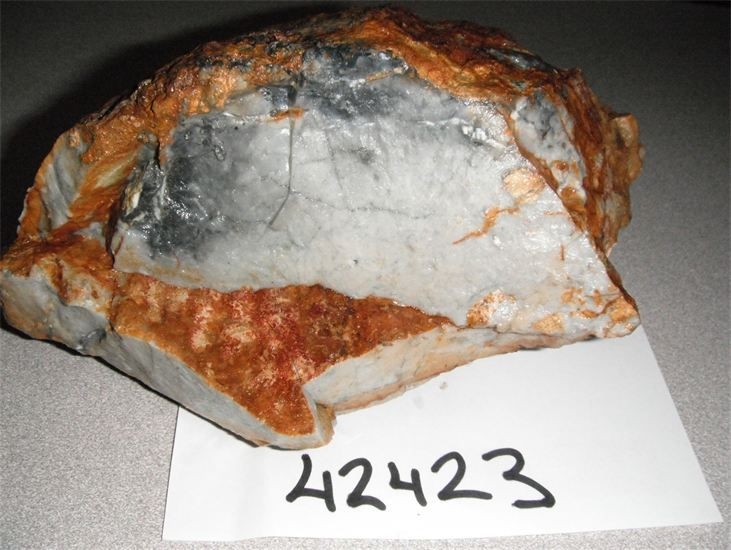 MMI Response Ratios for Base and Precious metals

The Dani showing is located on Hawkesbury Island, 60km SW of Kitimat in the Douglas Channel. The property is at the south end of the Ecstall Belt which hosts several known mineral deposits including the Ecstall, Packsack and the Scotia deposits. At the Dani, the host quartz-sericite unit is 200-250m wide and at least 5km long. The showing consists of semi-massive to massive bands with zones of 5-20% pyrite-chalcopyrite mineralization in the surrounding rocks. Samples of the blasted bedrock (float) assayed up to 10.17% Zn, 5.68% Pb, 202.9gm/t Ag and 1.26gm/t Au. The showing is located at the terminus of road that ends at a deep water log landing.

Alteration minerals led BCGS geologists to conclude that the mineralization was a skarn Equity a very brief property evaluation in 2002 and recommended further work as they felt that it could very easily be VMS related (ARIS 27128). The alteration minerals in question at the Dani, magnetite, diopside, fuchsite, kyanite garnet are also present at many of the Snow Lake VMS deposits in Manitoba.

Massive sulphide mineralization from the Dani.

The Rainbow was discovered in 1930 by prospectors from Hazelton and consists of bornite and chalcopyrite in vesicular and amygdaloidal volcanics with some mineralization on prominent fractures which cross-cut bedding. Chalcopyrite was reported in the footwall pyroclastic rocks well below the showing. Government inspectors visited and sampled the showing the same year and reported significant mineralization across the full width of the showing over a vertical distance of more than 90m. Three samples were collected from the top, middle and lower part of the showing and are reported as follows:

Access in the form of logging roads within 7.5km of the main showing.

Exploration potential of known mineralization would yield 3 million tonnes of 2% Cu and ~ 30gm/t Ag. If one doubles the depth to 200m, this becomes 6M tonnes at 2% Cu and grade to be increasing with depth.

The Bear Hill property covers a number of silver/copper showings discovered in 1980 by BP Minerals Ltd. The company did detailed mapping and sampling the following season and optioned the ground to Placer Development Limited in late 1981. Placer conducted additional geochemical and geophysical surveys in 1982 and drilled 2 holes targeting a moderate IP anomaly without intersecting any significant mineralization. The locations and orientation of these holes did not test extensions to the Main Showing.

Significant assays from the property include:

The Main Showing is reported to trend NW which is supported by the extensive surveys conducted by Placer Dome. The West Showing, the most prominent silver anomaly from these surveys, is also associated with a prominent NNE photo linear which may be the surface reflection of a fault structure. The silver geochemical anomaly has a strike length over 3500m and is at least 400m wide at the Main Showing. Humus collected during the 2016 program outlined anomalous silver and copper concentrations suggesting the Main Showing trend extends to the NW for a distance of at least 400m and encompasses mineralization present at the West Showing. The anomaly is at least 175m wide in the vicinity of the Main Showing and in excess of 100m wide at the West Showing. The geochemical survey also identified four parallel Au anomalies, flanking the Main Zone trend. These anomalies attained widths of 300m with Response Ratios of up to 200 x background with a maximum RR of 1790 x background (179ppb) located 300m SW of the Main zone.

Main Zone mineralization is located near sample 103759. Note the lack of anomalous Au in the Main Zone trend in the stacked Response Ratios from the Ah-humus survey and the strongly anomalous Au RRs flanking this trend.

West Zone mineralization is located near sample 103774. Note the much stronger Ag, Cu and Pb signatures in Ah-humus and the continued lack of Au values in the Main Zone trend. Note also the two Au anomalies located SW (left) and the 100m wide Au anomaly NE (right) of the West Zone.

Banded barite/quartz veining from 200m south of the West Showing.

1982 Ag Soil Geochemistry from Placer Development - contoured with a NW bias to match trend of Main showing. Anomaly is 3500m long and 400m wide near the Main Showing.